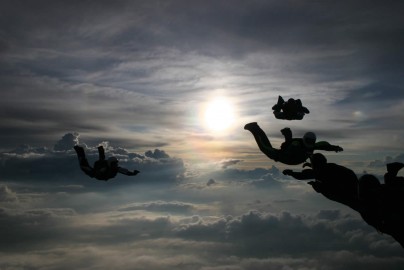 The 2012 USPA National Collegiate Parachuting Championships came to a finish on December 31st, just in time for New Year’s celebrations. The winners definitely had a lot to celebrate. Of the eighty-seven competitors, eight new records were set.

The 2012 USPA National Collegiate Parachuting Championships wrapped up on the last day of the year in Eloy, Arizona.

14 colleges and universities brought a total of 87 competitors to the small town 65 miles southwest of Phoenix.

The Air Force Academy had an extremely strong showing in multiple events. Air Force Legacy set a college record with a 36 point dive in the sixth round of the 4-way open event on their way to taking gold in the event. In addition, Air Force’s Hysteria took over in the 2-way vertical formation event, with a dominating score of 91.

Air Force Academy’s Dustin Weeks was on target in the sport accuracy competition. Weeks won the masters class and set a four round total score record at 1.97 meters. He also set a performance record by starting with four consecutive dead centers before finally missing by 1.54 meters.

The U.S. Military Academy at West Point was a powerhouse in the classic accuracy competition, and broke a trio of records.

Kurt Yeager’s combined score of 0.10 meters won gold in the masters class and set a new competition record for the event. Yeager narrowly edged Ben Garlick, also from West Point, who set a performance record by following a dead center dive with a two-centimeter score.

The team accuracy event saw the Guardian Owls from West Point set a new competition record with a three-round total of 0.43 meters, easily eclipsing the old record of 0.65 meters.

A pair of southern schools also managed to win gold, as the B’Ween team from the University of South Carolina won gold in 2-way and tied the existing record with a 16 point round, while the GT Special Needs team from Georgia Tech won the 4-way advanced event.

Teams celebrated New Year’s Eve with a 6-way speed event to wrap up the meet. The competition turned into a fierece battle between two teams from Air Force that saw the Wild Bill Wegner’s edge out a victory with a blistering time of 7.52 seconds.

The meet officially concluded last Tuesday evening, where the teams met for a banquet dinner and awards cermony.