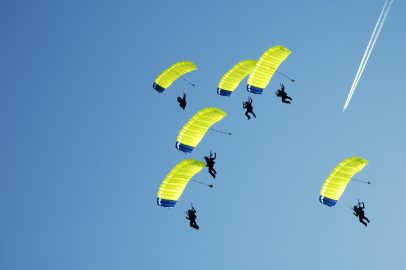 The collegiate championship has taken place since 1958, hosted with the intention of promoting safety, competition, sportsmanship, and camaraderie among college skydivers, and opens the door for college students to compete. According to the USPA, many of today’s leaders in the sport started off as college skydivers.

Like all of USPA’s championship events, the format varies from year to year. Sometimes all segments are hosted at a singular location and other times there are up to three different championships held separately. The results of many of these championships help to determine the U.S. Teams for international championships.

It was the longest-running collegiate event since its inception, and despite some minor inclement weather, jumpers all completed the minimum number of required rounds, at least, in all events. 82 jumpers from across the U.S. competed, including representatives of the U.S. Military Academy, the U.S. Air Force Academy, and the U.S. Naval Academy. Universities represented include UConn, Fort Lewis College, Georgia Tech, Iowa State, Kansas State University, Northeastern University, University of Georgia and UMass Amherst.

Next year’s date and location have yet to be announced.