The 9th FAI World Cup of Canopy Flying wrapped up earlier this month, taking place from November 27th to December 1st, 2017 at Skydive Dubai. The annual event brought together 94 total competitors from 25 nations. For many competitors, it was their first time competing in an international championship.

The competition was made up of three events over the week it took place: Distance, Speed, and Zone Accuracy, with three rounds each.

Distance was up next on November 29th. Cedric Veiga Rios (France) turned it around and took first in the second segment of the competition with 292.845 points. Nicholas Batsch (USA) trailed behind with 278.1 points, and Cornelia Mihai (UAE) took third with 267.368 points. 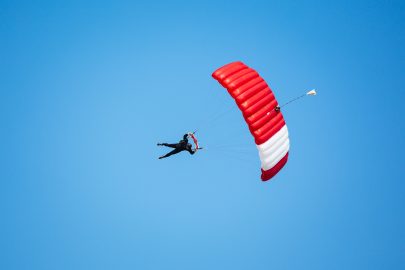 On December 1st, prior to closing ceremonies, competitors had the option to participate in two rounds of freestyle competition, which did not contribute to their overall scores. Curt Bartholomew (USA) took first with 198.423 points. An incredibly close second place went to Nicholas Batsch (USA) with 197.072 points, and Matteo Pagani (Russia) took third with 190.54 points.

The United Arab Emirates placed first in the teams calculations with 2391.064 total points. The United States took second with 2311.528 total points, and third went to France with 2118.313 total points.

Next year’s competition has not been scheduled at this time.