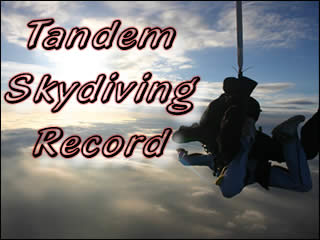 A brother and sister set a 24 hour tandem jumping record in Harbor Springs, Michigan; all in the name of charity.

Luther Kurtz and Angela Bishop started at 6:35 pm on June 29th and by the afternoon of the next day, they had broken the old record of 103 tandem jumps in a 24 hour period that was set back in April of 2009.

It took 20 hours, 18 minutes, and 12 seconds to jump 104 times and to set the new Guinness World Record for most tandem skydives in a 24-hour period. A Guinness official was on-hand to ratify the record.

A nonprofile organization, Top of Michigan Trails Council, was the benficiary of over $10,000 raised by the sibling pair.