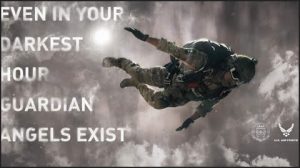 In skydiving news everyone knows how the Army has Delta Force and the Navy the SEALs who typically ride helicopter or parachute jump into hostile areas to perform missions that often are more fantastic than anything ever seen at the movies. But CNN reminds us that few people have heard of the Air Force’s own special ops group, the Combat Control Teams.

The CCTs have two typical missions. The first is to secure air fields in hostile territory. This kind of mission starts with airmen tossing packages of dirt bikes out the door of a transport plane, which parachutes down to the target. Then CCT commandos follow, start up and hop on the bikes, and secure the air fields, removing obstacles and making them ready for incoming aircraft.

The other type of mission that a CCT is sent on is to spot targets for air strikes. They would parachute into enemy territory and call in air strikes against enemy targets. They often work with regular ground forces to assist them with providing air support. The CCTs work with every aircraft from B 2 stealth bombers to Apache gunships.

The CCTs were the tip of the spear during the initial invasion of Afghanistan in 2001, in the wake of 9/11 by calling in air strikes against the Taliban in support of the Northern Alliance. Should the United States be obliged to hit the ISIS army in Iraq from the air, CCTs will likely be forward deployed to support those strikes.

CCTs are not always bringing death from the skies. In the wake of the 2010 earthquake in Haiti, CCTs were deployed to secure and prepare air fields for use in bringing in air supplies.