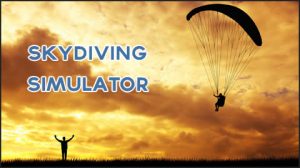 Teaching people to jump out of a perfectly good airplane at a high altitude can be a challenging task, absent actually starting by jumping. an unwise method to say the least. Traditionally paratroopers, after practicing their falls and landing skills, will jump from a high tower before being obliged to make a real jump. Noting that pilots train on simulators, a company called Systems Technology, Inc has developed a skydiving simulator called Parasim that gives one the full experience, called Premeditated Jumping, without the risk of that sudden stop on the ground if the parachute fails.

Basically the participant in the simulator is suspended in a harness inside a ten foot frame while wearing virtual reality goggles that will show what a real sky diver would see during a jump. A helmet display shows an altimeter reading that counts down as the participant undergoes a simulated free fall. The harness allows one to convert body motions into aerodynamic-appropriate responses, just as if one is falling.

At a certain point the participant pulls a simulated ripcord and the harness moves him to a vertical position as if a real parachute has displayed. Then one can moves the steering toggles and one moves from side to side. In the meantime the VR display shows the simulated ground approaching and one has to get ready for that landing.

The Parasim even simulates differing wind and weather conditions as well as parachute malfunctions. The simulator is used to train both civilian and military jumpers in a large number of countries.