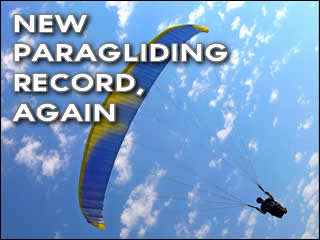 A few weeks ago, Nate Scales was still receiving handshakes and congratulations from fans for his paragliding world record-breaking flight of 319km over the northern Rockies when that record was broken by another paragliding pro. Nick Greece, who edits for Hang Gliding and Paragliding Magazine should never be mistaken for a guy who hangs out behind a desk, wishing he was a part of the action. On August 7, 2012, Nick put his money where his red pen usually is and took to the skies on his own paragliding adventure.

Nick started his flight near his own home (he posted on Facebook that he was “literally in his own back yard) with his good friend and mentor Jon Hunt by his side. Together, Nick and Jon flew over the Wind River Mountains for the first leg of their trip, 150 miles. They then took on the sky over over the Red Desert to finish the ride, landing in Rawling, Wyoming. Jon hung in their with Nick for 200 miles. But Nick pressed on, and ended up completing his flight at 204.6 miles (or 329km). The entire flight took Nick a whopping six hours and fifty-seven minutes.

Nick was flying his trusty EnZo into some very interesting, hostile, and uninhabited territories. Nick states that “Landing would not have been an option.” Still, he pressed on, determined to be the next guy who would be getting cheered for having broken the foot launch distance record in the United States.

You have to be wondering, who’s going to be next? With so many attempts being made at beating this record, who will come out on top and be named the Ultimate Paragliding Champion. Only time will tell. If you want to keep on experiencing the incredible rush with us, stay tuned!