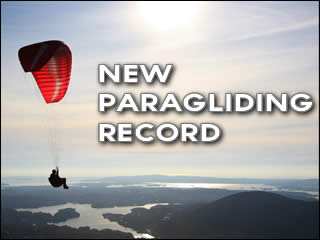 On June 30, 2012, in Sun Valley, Idaho, Matt Beechinor set a new paragliding record for the United States. Little did he know, Nate Scales would be coming on the scene, to the same area of the country, just a few weeks later and beat that record. Matt’s record was 301km. Nate’s was 319km. In fact, not only was Nate’s flight record-setting in US mountain distance and in US foot-launch distance, it also set a new Idaho state record and a new foot-launched paragliding world record.

Nate was flying a Niviuk Icepeak 6 during his flight, which took off from Bald Mountain. He landed almost eight hours later, after having crossed almost the entire northern Rockies at about 40mph. He reported that it was a beautiful flight for the entire eight hours. The wind was mellow and he enjoyed the climbs. In fact, he wants to try and beat his own record. Nate states that he thinks 350km (or 200 miles) possible.

Nate is truly an inspiration. He has been attempting to set this record for years. In 2010, he set a new Idaho record 148.5 miles. Prior to that he had been taking turns increasing distances with his long-time friend and distance rival Honza Rejmánek. One thing is for sure; if the distance keeps on increasing, Nate will have no problem reaching his goal of 200 miles, possibly only within a few short years. Through perseverance and determination, he has achieved what many hope to achieve but never attempt.

Nate continues to be enthusiastic about his time spent paragliding and will continue to go for more and more records. He enjoys his time spent in the air and looks forward to the next time. We will all wait with baited breath to see what his next distance turns out to be.