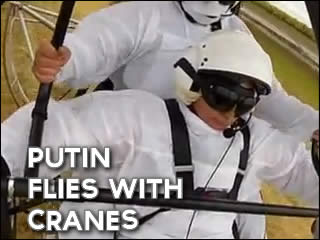 Russian President Vladimir Putin fired back at his critics after he came under withering attacks in cyberspace for his latest adventure.

One would expect nothing less from the Russian leader whose adventurous exploits reached new highs when he took the controls of an ultralight aircraft at a research center to lead a training flight for sheltered cranes.

The Flight of Hope experiment is a worthy mission as scientists there are trying to breed and restore the population of Siberian cranes. Only about 3,000 of these birds remain in the wild. Part of the project involves using the ultralights with pilots dressed in white coveralls so that they resemble birds to train the birds in flying.

Putin took a turn at a training flight on a recent visit to the site and the Russian blogosphere exploded with jokes, criticism, and the type of political jousting that makes American Super Pacs look tame.

In response to some of his critics, Putin fired off an innuendo-leaden comment in an article on the RT Network’s website.

In answer to a question about one political blogger comments that only 63 percent of the cranes flew with Putin and the rest flew south, Putin answered:

“The only ones that didn’t fly were the weak cranes. And that was the first attempt. On the second, they all flew.”

With a loaded thrust at humility, he added:

“To be honest, I have to acknowledge it was the fault of their leader, the pilot, that not all the cranes flew right away, because he accelerated too quickly and too high. They couldn’t keep up.”

These exchanges certainly keep the political dialogue fluid and entertaining in Russia.

Putin, who has been the most significant and powerful leader to emerge in Russia since the collapse of the old USSR, has found a way to stay in the public eye in ways that continue to surprise and provide plenty of fodder for his critics.

Putin is not shy and his exploits read like those television commercials for the “most interesting man in the world.” The headlines on the RT network celebrate his treasure hunting dive to the “Russian Atlantis,” his taking the controls of a fire fighting airplane, his shooting a whale with a crossbow to get samples for a gray whale experiment, his day spent with a Siberian shepherd’s family and his dive into Lake Baikal to check out an ecosystem research project.

It looks like the Russian president has decided that he’s not going to let North Korea’s “Dear Leaders” get a leg up on him.