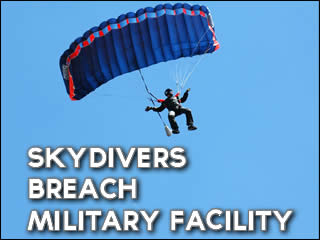 Before you take that next jump, don’t forget your government issued identification in case of accidentally breaching security at a Naval base on the way down.

According to a recent report by NBC News, that’s what happened to two skydivers who were blown off course and landed at a Navy nuclear submarine base in Georgia. They were aiming for nearby St. Mary’s airport when strong winds knocked them off course. The base located along an inland waterway near the Florida-Georgia border, is home to Ohio-class submarines that carry Trident nuclear ballistic missiles. As a result, security is quite high and the two skydivers were spotted almost immediately.

Complicating the situation was that one of the jumpers was not a U.S. citizen and not carrying a passport. Until their identities were confirmed by The Jumping Place skydiving business, they were detained by base officials for hours.

Base spokesman, Scott Bassett states that there have now been a total of seven such incidents in the last three years. “It’s a matter of serious safety concerns,” he stated. “It’s extraordinarily dangerous to parachute onto the base.”

Another spokesman, Marshall Gamon, states that the pair were quite fortunate they did not get shot before hitting the ground.

For that next jump, you may just want to be as far away from secured nuclear bases as possible. Unless, that is, you want your name turning up on the next update of TSA’s “No-Fly” list.