“Sometimes we have to do something just to show that you can do it”! This sentence summarizes the purpose of the Mars Ingenuity Drone.

The rover Perseverance launched in July of 2020 aboard an Atlas V rocket. After a six-month journey, the rover has landed on an ancient river delta, Jezero crater. The rover will be searching for proof of previous life that formed some 3.9 billion years ago. Onboard the rover is a small hovering aircraft, the Mars Ingenuity Drone.

The Mars Ingenuity drone helicopter does not carry any science experiments. I guess you could say that the drone is the experiment. The sole objective of Ingenuity is to prove that Mars flight is possible. The first flight will last only 20 seconds while hovering about 10 feet above the surface. Five flights are expected during the mission, but there will most definitely be more if all flights are successful. 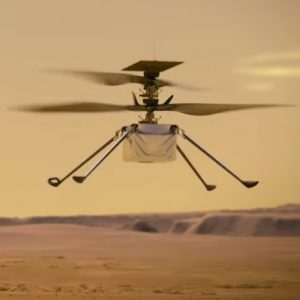 During this short 20 second first flight, the Mars Ingenuity Drone will be recording its flight data with onboard sensors. Nasa scientist has crunched the numbers in order to come up with predictive flight data numbers they believe will be recorded in the thin Martian atmosphere. By comparing the predictive numbers and the actual flight data, they will then learn how to build larger helicopter drones.

It is important to realize that these larger drones will be used as workhorses to assist in hauling supplies and materials in the future. Perhaps, these drones will evolve into full-size helicopters that will fly humans from one territory to another.

If successful, Mars Ingenuity Drone will be the first aircraft to achieve controlled flight on another planet. The first flight will be in the spring of 2021.