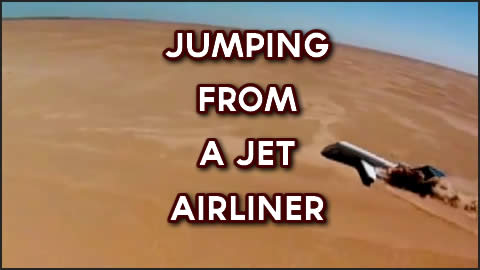 Imagine being a passenger on a Boeing 727 which is doomed to crash. Your only hope is to jump out moments before impact as the pilot and others prepare to do the same. Fortunately, as an experienced jumper, you have come prepared with your gear.

While this scenario may resemble something straight out of a James Bond movie, Perris, California skydiving instructor, Scott Smith found himself participating in this very scene moments before the plane crashed into an open field in Mexicali.

Not to worry though. This was actually a scientifically planned event. According to a recent report in The Press-Enterprise, Smith was along for the ride with the plane’s three-man crew as they participated in a Discovery Channel documentary about the effects of an airplane crash on the human body. The rest of the plane was filled with crash test dummies to simulate passengers. Video cameras were strategically installed at several angles in the fuselage to capture the action as the plane crashed.

Jim Wallace, another experienced jumper along for the ride agreed that jumping from the plane moments before it crashed was “one of the coolest things” he had ever done. Perris instructors Smith and Kenneth Gajda jumped tandem with the co-pilot and engineer. Since the pilot was an experienced jumper, he had his own parachute. Smith captured the jump with his personal video camera.

The three experienced skydivers provided their training and experience to the plane’s crew for the event. As Wallace explains, “for somebody to strap a chute on and jump like in ‘Point Break’ is in for some real trouble. It only happens in Hollywood.”

The non-jumping population need not be concerned, however. Passenger mandated jumpsuits and parachutes for airline travel are not planned anytime soon.