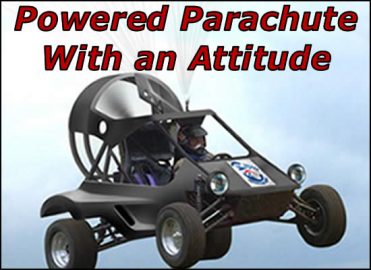 Ever wonder how James Bond would arrive at work if he had a nine to five office job? With this vehicle 007 may consider a change in careers.

Since the 1960’s mankind has been working on a car that flies. A British company maybe the first to accomplish this feat.

Prototype Skycar is street legal and can accelerate 0-60 in 4.5 seconds. (Image Courtesy of & Copyrighted by Parajet)[/caption]

Parajet has built a flying car that consists of a parachute mounted on a steel chassis. I am sure this concept sounds familiar to the powered parachute pilot but there are a few major differences between the powered parachute and the Sky Car. For starters, the flying car weighs 1500 lbs. The four wheel independent suspension is capable of traversing road-rally terrain. The vehicle is street-legal and can reach interstate speeds and beyond.

The pilot/driver can change from Road Mode to Fly Mode and vice-versa in three minutes. With the chute stored in the trunk of the vehicle, acceleration from zero to sixty in 4.5 seconds is compatible with the stock sports cars such as the Ford Mustang. Using Ethanol fuel technology, the Sky Car can carry two passengers for up to 250 miles before needing the tank topped-off.

Currently the Sky Car by Parajet has a working street-legal prototype mounted on a steel chassis. Production models are scheduled to roll off the assembly line in 2010 consisting of sleeker designs on a light-weight aluminum frame.