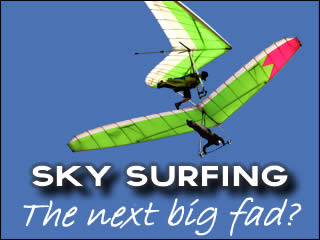 You may of heard of Planking, Owling, and Tebowing. All of which involve doing sedentary things in unusual places such as lying down on a building edge, crouching on top of an ATM, or kneeling and praying in the middle of a busy street intersection, all while having your picture taken for posting on the Internet.

Not to be outdone, a group of hang glider pilots has put a new twist on these latest fads by performing them while stacking their gliders one atop another. With moves known as the “Linebacker” and the “Wing and a Prayer”, this group takes Planking, Owling, and Tebowing to a new level.

According to Chris Cornbill “The feeling of standing on the nose of another glider while its flying is an incredible experience. You can control it with just slight pressures of your feet, yawing it side to side, pitching it up and down with pressure on your knees and feet.”

Before you watch the video we should warn you not to try any of these stunts as these guys are seasoned pilots.