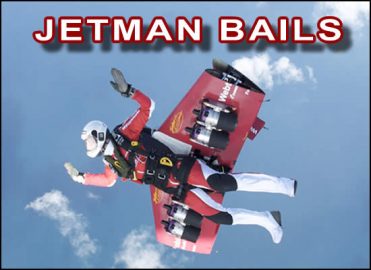 A Swiss adventurer, Yves Rossy, went down into the Atlantic Ocean after hitting turbulent air which caused equipment failure.

While attempting to cross the Strait of Gilbralter from Africa to Europe, the self proclaimed ‘Jetman’ had to pull his reserve chute after getting caught in turbulent clouds.

His attempted crossing was being billed as the first intercontinental crossing by man using jet-powered wings — from Tangier in Morocco to Tarifa on the southwestern tip of Spain.

Rossy, a 50-year-old former fighter pilot, had successfully navigated across the English Channel in September of 2008 on his homemade wing spanning 8 feet and powered by four kerosene-fueled jet engines.