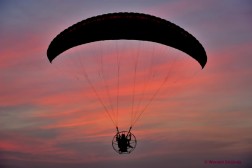 All across the globe, whenever the sun comes up, you will find workers dreading the arduous trek that awaits them – the morning commute. But one paragliding enthusiast has made powered paragliding news by finding a unique solution to this universal headache.

For Zeng Daxia of Zhuzhou, Hunan province, China, his morning commute has become a smooth, calming flight into peace of mind.  Zeng Daxia has found a way to avoid the traffic jams, gridlocks and dangerous drivers that fuel the average commuter’s frustration.  For Zeng literally flies to work.

Zeng Daxia is an avid paraglider who participated in competitions in his younger days and now coaches an amateur paragliding club in Zhuzhou.  He believes he lives in a perfect location for practicing the sport of paragliding and hopes that someday, his native Zhuzhou could become a major draw for paragliding enthusiasts.

“We are not merely paragliding amateurs, but also promoters of the sport,” said Zeng. “The conditions in Zhuzhou make it ideal for the paragliding and maybe in the future it can be developed to being tourism to Zhuzhou.”

Zeng cuts hours of exasperating traffic delays by simply gliding over the Xiangjiang River.  The trip takes him one minute using his motorized paragliding apparatus and is much more scenic than staring at the rear of the vehicle ahead while waiting for the traffic to start moving again.

“Rush hour” is not a phrase in Zeng’s vocabulary. At each day’s end, he again avoids the traffic trap by paragliding back across the river to a large platform atop his apartment complex.