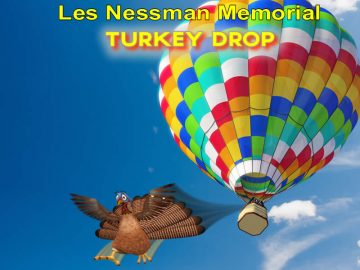 Hot air balloonists will gather in east central Illinois this holiday weekend for one of the really unique events in the sport.

The event, a spoof born from a tribute to an episode of a popular television sit-com series, will see participants attempting to hit a target with rubber birds.

It was 34 years ago when “WKRP in Cincinnati” aired the now legendary holiday episode in which the station’s farm reporter/newsman Les Nessman reports live on a promotional stunt featuring a turkey drop in a shopping center parking lot. Those who’ve seen the show will remember that the resulting chaos from the ill-fated idea of dropping live turkeys from a helicopter in that episode made for a really hilarious show. The last line of the show by the station manager was “As God is my witness, I thought turkeys could fly.”

The contestants will also go to extreme efforts to costume and decorate their birds.

The pilots and crews will take off at 6:45 a.m. on Thanksgiving morning and forecasts for good weather have planners excited. Poor flying conditions have affected the past four turkey drops.

Organizers say the event, which began as a fun event for area hot air balloon enthusiasts, has exceeded their expectations. It now draws pilots from other parts of the country and participants use the event as a skills practice session.

For more information on this event, contact the Balloon Association of Illinois

We wish all our readers a Happy and Safe Thanksgiving Holiday!