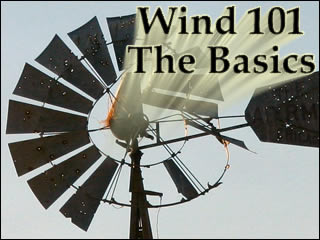 Where does the wind blow and how fast will it blow tomorrow is a question that if answered with accuracy could make one inherently rich or give one the appearance of heresy.

In all actuality the direction and speed of the wind is controlled by the chaos theory that everything is random and nothing can be predicted with 100% accuracy.

What makes the wind blow? There are two primary causes for the wind. The primary source of wind is caused by the unequal heating of the earth’s surface by the sun. When one area is heated quicker than other areas, the air warms, expands, becomes lighter, and rises. This causes the cooler heavier air to rush in and take its place. This rush of cooler air is what we know as the wind.

In the big picture, the rotation of the earth is the second primary cause of wind circulation As the earth is rotating from West to East, it tends to carry the wind with it. The flow of weather fronts are primarily from the west to east in the northern hemisphere due to the rotation of the earth. This effect of the earth’s rotation on the wind is known as the Coriolis effect,
There are two major jet streams which encircle the earth, one in each hemisphere. These swift air currents often control the directions of the weather fronts which in turn affect the directions of our local wind. These streams of air have speeds on the norm of 35 mph in the summer and 75 mph in the winter but are capable of speeds up to 200 mph. The jet stream is approx. 7 to 8 miles high. They are primarily navigated by jet airliners to gain air speed downwind and avoided when flying upwind.
Wind gusts are very sudden increases in the normal wind speed. Often gusts are not a problem except for approaches or launches. The duration of wind gusts are usually less than 20 seconds. When preparing to launch is usually a good idea to wait for a cycle and see what the winds are doing. On approach, it is best to maintain plenty of airspeed so that wind gust effects are kept to a minimum. Normally, the wind gust direction will be near the same direction as the normal wind direction. Keeping this in mind, if you land into the wind, the gust effects will be kept to minimum.
Turbulence is the random and sudden motion of air. Turbulence is made up of numerous small pockets of air. These smaller pockets of air are independent of each other, moving in separate direction. These pockets often collide and cause sudden shifts in the air currents. Turbulence can be caused by thermals, terrain, along weather fronts, or variations in temperature and pressure. If you are towing up, you may want to ask to tug pilot what the winds are like up higher. If you are an inexperience pilot, you may want to watch the other gliders launch and watch for their wing lift or disturbance in the canopy. Strong turbulence can flip a hang glider upside down or cause a collapse in the canopy of a paraglider.

There is no way to predict exact location of open air turbulence but wind rotor, a form of turbulence, can often be found around different formations in the landscape such as high trees, buildings, cliff edges, etc. Wind rotor can often cause a glider to be tossed in consecutive reversing directions. Until you are familiar with a flying site, you should be cautious of potential rotor makers. It is always a good idea to ask the locals about local rotor conditions.

Microburst is the sudden increase in downward air currents. They are primarily found near the edge of thunderstorms. The best way to avoid them is to not fly near the thunderstorm clouds. On the flipside of microburst is the cloud suck. Cloud suck is often located directly beneath a thundercloud and tends to lift the glider up into the cloud. If the rate of ascent is greater than the pilot’s ability to dive or spiral out, the pilot should turn towards the nearest edge of the cloud.

Thermals are a natural generator of vertical winds and the glider pilots primary resource for cross-country trips. They can often be found under cumulus clouds. They develop from the natural heating of the earth surface, which causes the heated air to rise.

The Science of Aerobatic Paragliding