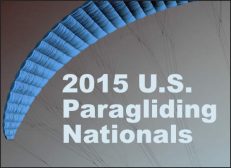 Owens Valley showed its teeth last week at the OVXCC US Paragliding Nationals. Winds knocked out four of the seven days.  Mitchell Riley won the men’s competition with 1048 points. Josh Cohn came in second with 1031 points. In the women’s division, Bianca Heinrick was first with 378 points and Lisa Dickinson took second with 239. The race featured 82 pilots representing 20 countries, with U.S. pilots dominating the competition.

Owens Valley has always offered a big challenge for paragliding. Like the little girl with the curl in the middle of her forehead, when the Valley is good it’s very, very good. Known for its great thermals and lifts, Owens offers rides unavailable anywhere else. Sometimes, however, the conditions can be chaotic.  That was the case for the 2015 classic.

Day one looked good at the beginning, but light conditions at launch created tangled lines and many failed lifts.  Turbulence a little higher caused more problems with some downed pilots, including Eric Reed and Jason Ely.  Due to chaotic conditions, the organizers decided to cancel the day.

Day three had the pilots “wa-hooing” as they finished the out and back task to the north end of the course. Great lifts carried some of the fliers as high as the legal limit, which was changed from 17,999 to 17,835 (5437m).

According to event director Kari Castle, on day four Owens gave the flyers what the Valley is known for–great flying. Mitch Riley was the only pilot to complete the 111.2 km task, however.  As it turned out, that was the last day of the competition.  Days five, six and seven were cancelled due to wind conditions.

The OVXCC was the last national championship competition of the year. Look for Cohn to continue his current place at the top of the NTSS ranking.