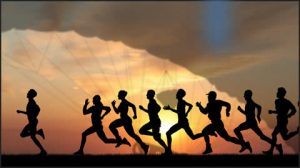 Extreme is a word that is thrown around loosely, and is often applied to activities as simple as dropping into a half-pipe on a skateboard. While difficult, dropping in is so common that we shouldn’t be rewarding it with the ‘extreme’ moniker. What about running a marathon; this is indeed difficult, but considering the world’s most prestigious race of this distance—the Boston Marathon—regularly fields more than 20,000 runners; not extreme.

Many consider the mere act of skydiving extreme, and perhaps this is true. While skydiving is common, it is far less so than the other examples. It also adds the element of fear that ups the ante on extreme. This level of extreme is also applied to foot races that stretch beyond the popular marathon’s distance, where a very different kind of fear is encountered. This is the ‘ultramarathon.’

What if you could combine the adrenaline pumping, heart racing, thrill of falling from 13,500 feet, with the soul exposing, life affirming, test of will, that is a 100-mile footrace? You can. A group that calls themselves the “Florida Ultra Runners,” although they now have members worldwide, came to the conclusion that a 102-mile race, where the first 2 miles are in freefall, would turn the knob on the extreme-o-meter all the way to eleven.

The group’s founder, Eric Friedman, an experienced skydiver and ultra-runner, describes the race:

Start your watch and climb aboard the airplane for the ride up to 13,500 feet where you will leap out of a moving plane to begin your 50 or 100 mile ultra run. The 120mph, 2 mile (approx 10k feet) free-fall will last 50 seconds before you pull the parachute on your tandem skydive and quietly and calmly float (3,000 feet) back down to the safety of earth. Upon landing you will immediately climb out of your parachute and begin running to complete the world’s first ever “Skydiving Ultra”!

The annual Skydive Ultra Run is taking place on Saturday, February 1-2, 2014, and the drop zone is in Clewiston, Florida. The competitors at Skydive Ultra represent the hardest of the hardcore, but will welcome anyone willing to give it a shot. Do you think you have what it takes? Because if you thought you had done it all… you were wrong. Register Here!