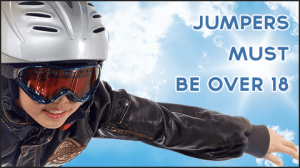 Adventurous young people wanting to take their first jump will need to wait until after their 18th birthday, or be content to practice at one of the indoor skydiving locations. In skydiving news, the US Parachute Association announced that the new minimum age to skydive will be 18 as of May 1, 2014. Previously, those younger than 18 were allowed to jump with signed parental permission, but that will no longer be an option.

According to the US Parachute Association, the companies that manufacture skydiving equipment have already raised their minimum age to 18 to avoid lawsuits, so it makes sense that they follow suit. It’s something that they have been discussing for the past few years and have finally come to a decision.

This comes on the heels of the tragic, yet inspiring story of 16-year-old Mekenzie Wethington, who fell 3,000 feet during a skydiving jump in January. She survived, and is recovering from her injuries. She has been able to remove her neck/back brace and is now able to walk with a walker.

According to the USPA, the timing is a coincidence and the new rule was not made as a response to that incident. It would have, however, prevented Wethington from jumping, saving her from that accident.

Skydiving is often viewed as a dangerous sport, yet it may be seen that way because often only negative experiences are reported.  The USPA reports that there were 24 fatalities last year out of 3.2 million jumps.

Regardless of the statistics, as of May 1st, anyone under 18 will no longer be able to jump. Indoor skydiving facilities do, however, allow minors to participate.