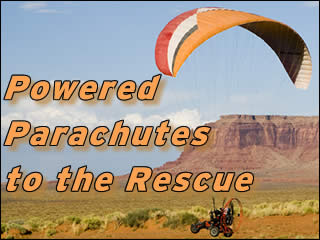 Powered parachutes are more and more being recognized as a powerful tool to fight crime by local police departments. The slow flying speed of a powered parachute in comparison to a small airplane makes these aircraft a better platform to view the lay of the land and spot illegal activity. Short take off lengths of 100 feet on grass strips offers rural police department an easy way to get an eye in the sky.

Powered parachutes can fly as slow as 25 mph and the characteristics of the wing make these aircraft virtually impossible to stall or roll. These features along with the reputation of being the easiest form of aviation to learn makes powered parachuting an attractive and inexpensive form of getting the police force into the air.

In response to a need for a low cost easy to use aircraft for police work, the National Institute of Justice (NIJ) started field investigations into the use of powered parachutes. An early demonstration of use by the NIJ was after hurricane Rita landed in Texas in September of 2005. The powered parachute was used to fly aerial photography of the damage area and search for looters. Since then, they have been used to search for illegal drug farms, search and rescue, and aerial infrared photography.

One of the first police agencies in the nation and the first in California, the Ripon Police Department is utilizing grant money from the Rural Law Enforcement Technology Center (RULETC) to purchase powered parachutes. With the $30,000 grant and two volunteer police officers, the department plans on using their powered parachute in search and rescue operations along the Stanislaus River. Every year the department receives several phone calls about lost rafters on the river. With the powered parachute they will be able to search the river in minutes. Future plans for the PPC includes the addition of PA system and an on-board live-feed camera.

In New York, the Macedon Police Department is using local volunteer PPC pilots to get a better view of the surrounding farm land. According to police Chief John Ellis, corn crops are often used to hide patches of illegal drugs that can’t be seen from the road. In the past, the police department has relied upon helicopters for drug searching tasks, but with backlogs and the cost of operating a helicopter, powered parachutes seems to be a more effective alternative. With the use of the slow flying powered parachutes, officers tag along with local pilots to spot these hidden drug farms.

As they are now, powered parachutes are seen as a novelty in police work but in twenty years time, you may be receiving a traffic ticket from your local PPC in the sky. Currently there are only 7 police agencies in the United States using powered parachutes as part of their policing team. Optimistically, there is a very good chance that the powered parachute wave will catch on across the country and most agencies will have a couple of PPC pilots on the force, say in twenty to thirty years.