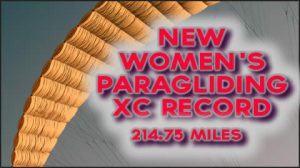 It has been just a little over three years since Kamira Pereira flew 324.7km (about 201 miles) and set a women’s world record for paragliding. On November 20, Seiko Fukuoka slaughtered that record as she flew 345.6km (nearly 215 miles), beating Pereira’s paragliding world record by more than 20km. Flying a Niviuk Icepeak 6, she started off in north east Brazil in Quixada and landed over 10 hours later. October and November attract paragliders in droves to Quixada in Brazil. The consistent winds allow pilots to fly for long periods of time, a perfect set up for Seiko Fukuoka-Naville to attempt and succeed at gaining this new world record.

This has been a good year for Seiko with her taking first in the French Paragliding Championship and the Tailoires Paragliding World Cup Championship. This flight places her in first place in the World XC Contest!

Fukuoka is no stranger to the paragliding scene. She has  been winning competitions since her first season competing, a pretty rare accomplishment in this sport. Fukuoka hails from the greater Tokyo area. She discovered and quickly fell in love with paragliding in 2000. She also has a unique strategy to cool down from the adrenaline rush after flights- cooking. She is also a skilled horsewoman. For the majority of the year she resides in Japan, but for three months each year, she makes her home in Switzerland where she competes in numerous competitions. It seems  Fukuoka will continue to be an asset to the women’s paragliding community for years to come.