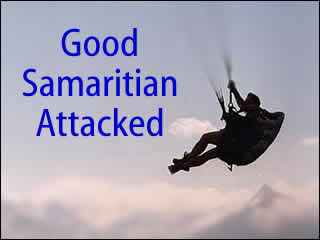 When a paraglider pilot decided to be a Good Samaritan and talk to a group of troubled youths, he had no idea that his good deed would end up in a trip to the hospital.

Davie Edwards arranged for the kids to hike to the top of Mauao Mountain in New Zealand where he would land his paraglider on top to give an inspirational speech.

The pilot knew he was in trouble when he noticed the group of 14 year old boys throwing rocks at him while attempting to land. He shouted at the youths to stop while making his descent.

Immediately after landing on top of the mountain one of the five youths charged and attacked him.

The thirty-nine year old Edwards managed to subdue the attacker by getting on top of him. When he looked up to see where the others were, he received a kick to the face by another youth and was toppled onto his back. Edwards received an additional kick to the back of the head followed by several punches.

The whole incident was recorded on video tape by Edwards’ friend. The tape was used as evidence against the youths when they were arrested. The female guardian of the youths said they were difficult to control. There were a total of five 14 year old boys in the group. Three of the five have been arrested charged with assault.

Edwards received a ride down the mountain on a mountain quad where he was taken to the hospital and allowed to leave with a broken nose and injury to his eye socket.