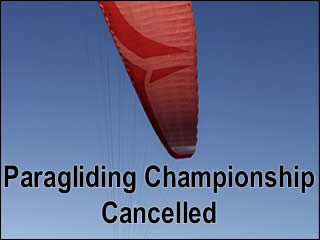 The 2011 Paragliding World Championship was cancelled after safety concerns.

The organisers do not intend to speculate on the causes of either of the accidents, but can provide some additional facts.

In the first incident, the pilot was flying low along the ridge.  The glider was seen to suffer a frontal collapse, horseshoe and fall in a stable parachutal stall.  Close to the ground, the wing spun and the pilot impacted the ground. No reserve parachute was deployed.

In the second incident, the pilot was flying towards goal at altitude.  The glider was seen to suffer a frontal collapse, immediately followed by a large cravat and high velocity spin.  The reserve parachute was not deployed before the pilot impacted the ground.

The organisers reported yesterday that there were three further minor incidents involving the deployment of reserve parachutes.  The organisers would like to clarify that they do not consider reserve deployments to be minor incidents; the meaning was that the outcomes of these incidents were minor.  In fact, there were four confirmed reserve deployments and rumours of a fifth, but no supporting evidence.  Apart from the two fatalities, we can confirm that all other competition pilots landed safely and were uninjured. The confirmed pilots who deployed their reserves were: Valter Paduano, Luxemburg, Ronny Helgesen, Norway, Steban Novoa Smith, Colombia and Marina Olexina, Russia.

There was a reserve deployment in Task 1, about 3km west of launch, after which Chinese pilot Xiangping Hou landed in a tree.  She was extracted unhurt, by the mountain rescue team, but her glider was damaged.  During the practice task, Marko Hrgetic, Croatia deployed his reserve parachute and landed safely.

Two further deployments were reported on registration day.  One was Etienne Coupez from Luxemburg, the other is unknown, but understood to be a competition pilot.  No injuries were reported.

We would like to thank the local medical teams, police and staff of the town hall for their considerate and efficient work in expediting the investigations and necessary paperwork as swiftly as possible, in order to allow the deceased pilots to be flown home.

Once again, the organisers, the attending FAI Officials and the FAI president wish to express their deepest sympathies to the families and friends of both Francisco Vargas and Eitel von Muhlenbrock.

Before the third day of competition could start the FAI Officials stopped the competition with decertification of the gliders:

Due to recent incidents at the 12th FAI Paragliding World Championship in Piedrahita, Spain the CIVL Bureau has temporarily suspended the certification of Competition Class Paragliders with immediate effect.

This suspension means that paragliders classified as Competition Class under Rule 12.1.1.2 of Section 7B of the FAI Sporting Code are not permitted to fly in FAI Category 1 championships for the period of the suspension.

Organisers of FAI Category 2 events are also strongly advised to consider whether Competition Class paragliders should be permitted to compete in events with racing tasks for the period of the suspension.

Our hearts and prayers go out to the family of those pilots who have died in this event.