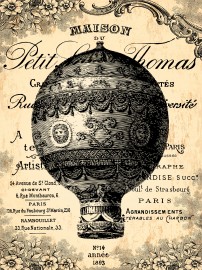 Here’s a trivia question for you. What air sport’s beginnings involved a sheep, a duck, and a rooster? That may sound like the setup for a bad joke, but it’s a real scenario – one that lay the foundation for one of today’s popular air sports. What was it? Believe it or not, the launching of the first “manned” hot air balloon.

Back in 1783, a few years before the French Revolution, a French scientist launched one of the world’s first hot air balloons from the front courtyard of the Palace of Versailles. The balloon carried a sheep, a duck, and a rooster; and it stayed aloft for several minutes. A couple of months later, another manned balloon flight took place – this time from the middle of Paris with two Frenchmen on board instead of farm animals. A couple of years after that, a third Frenchman became the first person to cross the English Channel by air. And now, a couple of centuries later, Frenchmen are making headlines once again in the field of hot air ballooning.

Two years ago in 2011, the Albuquerque International Balloon Fiesta in New Mexico set a record when it launched 345 balloons in less than an hour. This year that record was broken by the Lorraine Mondial Air Balloons festival in France. Organized by a descendent of the long-ago scientist who launched the farm animals, the festival was held from July 26th to August 4th at the Chambley-Bussières Air Base in eastern France. On July 31st, it launched 408 balloons within an hour, knocking Albuquerque back to second place. That was surprising; but perhaps the most surprising thing that happened during the festival was the fact that the record setting didn’t stop there. The next day, the festival launched 391 balloons simultaneously – the largest such launching on record.

So has the stage been set for a rivalry between Albuquerque and France? The officials of the Albuquerque festival don’t seem to think so. “It wasn’t like we did anything special when we established the record before,” the executive director is quoted as saying. Have there been any demands for the festival to reclaim the record? If there have been, he wasn’t aware of them.