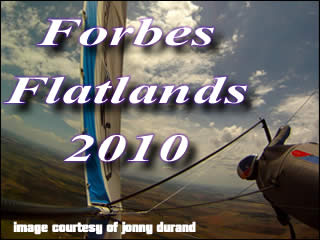 The two-part Forbes Flatlands Hang Gliding Championship took place between January 2-12, 2011. This year the competition was divided into two competitions, the Craig Worth Open and the Steve Hocking Challenge.

Jonny Durand of Australia took 1st place in both segments of this year’s competition defeating out fellow Australian Curt Warren in 2nd of Gerolf Heinrichs of Austria in 3rd in the Craig Worh Open. Jonny also took 1st in the Steve Hocking Challenge. Jonny was also the 2010 Forbes Champion.

All Results are here for the Forbes Flatlands Hang Gliding Championship.