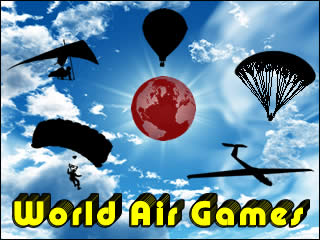 The United States sent 17 competitors to the World Air Games between June 6th and June 14th 2009. This event is the premier event of for air sports enthusiasts boasting 10 disciplines, 27 competitions, and 3 venues in Italy.

The disciplines included in the event were Aerobatics, Aeromodelling, Ballooning, Experimental Aircraft, Gliding, Hang Gliding, Helicopters, Microlights, Parachuting, and Paragliding. Most of the events were held at the airport Torino while the hang gliding and paragliding competitions were held in Avigliana, about 15 miles from Torino. The hot air ballooning competition was held in Mondovi.

The United States placed 3 on the medal podium:

List of additional United States participants and their (finish):