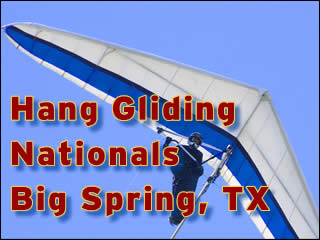 The second half of the 2009 United States Hang Gliding Nationals was held in Big Spring Airport, Texas, about 300 miles west of Dallas. The event took place during August 9-15, 2009. 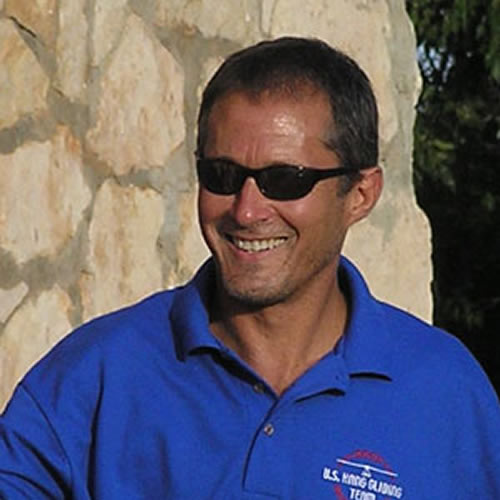 By winning three of the seven scheduled tasks and finishing in the top four in every task, Glenn wins his first National Hang Gliding Championship. Glenn is a resident of San Diego, California and has been flying since 1981. He is a member Team Moyes and is also a member of the San Diego Hang Gliding and Paragliding Association. Glenn was the alternate on the 2009 US National Team.

Photos of the competition by David Glover.

Task 7 results are located here
Glenn Volk had the longest flight of the day when nobody made goal. This was Glenn’s third task win and was the last task of the competition. Glenn was followed by Jeff Shapiro and Zac Majors.

Task 6 results are located here
Derreck Turner won his third task of the competition today which lifts him into third place overall. Frontrunner Glenn Volk finished in 4th, keeping his consecutive 4th or better standing in every task so far. Glenn remains in first overall.

Task 5 results are located here
Glenn Volk out flies the rest to win this task. This task was the same as yesterday’s 84 mile task. This is Glenn’s second task win and has finished in the top 4 in every task so far at Big Spring. Glenn has been flying since 1981 and has never won a National Championship. He is based out of San Diego, California.

Derreck Turner was first to goal in this 102 mile task. He out flew two members of the USA World Hang Gliding Team, Jeff O’Brien in second followed by Zac Majors.