Lawrence, KS is making headlines in skydiving news in whether it should allow skydiving at its municipal airport. The issue emerged again publicly at the Lawrence City Commission’s Nov. 10 meeting. Previous requests date as far back as 2009. Six recent requests from different individuals have been made this year to use the city-owned Lawrence Municipal Airport as a skydiving drop zone.  The requests were tabled because of safety concerns.

Elizabeth Isham Cory, a public affairs official with the FAA, said via email that a change such as the addition of skydiving operations would require an airport to notify the FAA. FAA officials would then work with the airport to make sure it meets safety requirements. Commissioner Matthew Herbert said that in fair judgement,  the city let FAA officials know of the requests, along with their safety concerns in July and requested a formal study.

The FAA recognizes skydiving as an aeronautical activity. Federal regulations require that airports receiving FAA funding must accommodate the activity unless it’s determined by the FAA that compatibility issues prohibit it. The Lawrence Municipal Airport in fiscal 2014 was awarded about $345,000 in federal grants through the airport improvement program.

The airport is located north of Lawrence and is an uncontrolled airfield with approximately 100 daily flight operations. Herbert says it is used very little and that people here have wanted to do this for years. Chuck Soules, Lawrence Public Works Director said that the skydiving issue would likely be brought up at the December meeting of the city’s Aviation Advisory board.

The airport appeared to have been found safe for skydiving activities according to a study completed back in 2010 that surfaced in the comment section of the local paper. 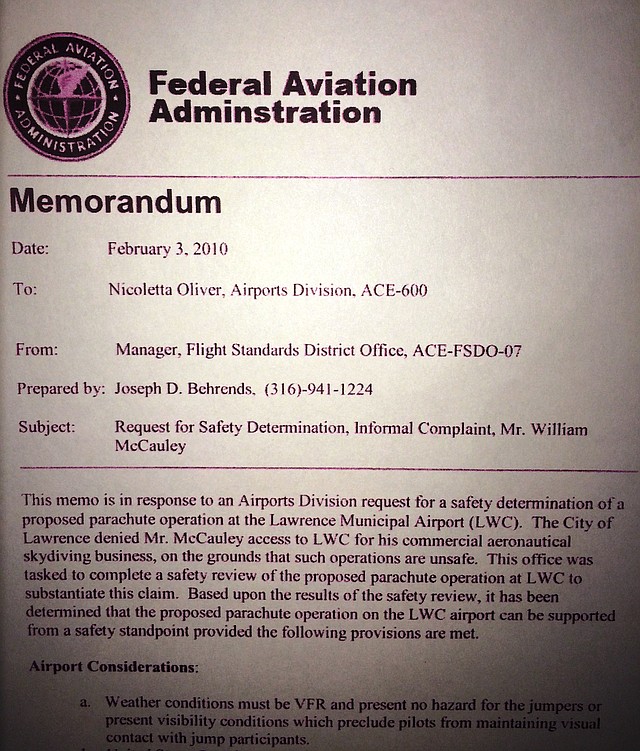